Here is the next object for our online ‘Turn out your Pockets/Kindle the Flame’ exhibition. This little pot, discovered during lockdown, is a reminder of how we are always connected across time and place.

‘It seems more than a mere coincidence that while working to restore our terraced Victorian garden every day during Covid19 lockdown I should unearth, amongst the rubbish of old metal chains, long-lost rusted garden tools and a loads of bed springs, the remains of this little pot.

The clear description of its contents made it relatively simple to research its history. As a young man Giles Roberts (1766-1834) set himself up as a chemist in Bridport in Dorset, with a licence to draw blood, extract teeth and cauterise wounds. After gaining qualifications at Guy’s and St Thomas hospitals in London he set up a practice, and was elected Medical Attendant to the poor in Bridport in 1807, campaigning for better hygiene and, during a cholera epidemic distributing, at his own expense, a pamphlet on healthy living.

The recipe for ‘Poor Man’s Friend’ ointment was a trade secret, and was only rediscovered in the former shop quite recently. Bridport Museum bought it for £480.00 in 2003 along with other Dr Roberts ephemera. Apparently it consisted mainly of lard and beeswax, salts of mercury and zinc oxide –it would have been effective in the treatment of eczema and minor skin infections.

After his death in 1834, Dr Roberts’ pharmacy continued to manufacture the ointment contained in this pot, under the names of Thomas Beach and John Barnicott until 1903.This size pot (4cm tall) was priced at 1/1½ It seems to be an early edition, compared with photographs online, and since the house and garden in Fore Street Kingsbridge was developed on open land in 1861 it is probably from mid- to late-Victorian times.

Not a huge or valuable treasure, but its associations with our developing garden restoration and the excitement of ‘a found object’ in the difficult times of Spring 2020, will certainly make it a keepsake of personal significance. It provides a link between the present and the past – perhaps the ointment in the jar was used by Mr Henry Thomas Adams, the builder and first occupier of this house – or even his second wife Elizabeth,who surprisingly came from Adelaide, S.Australia’! 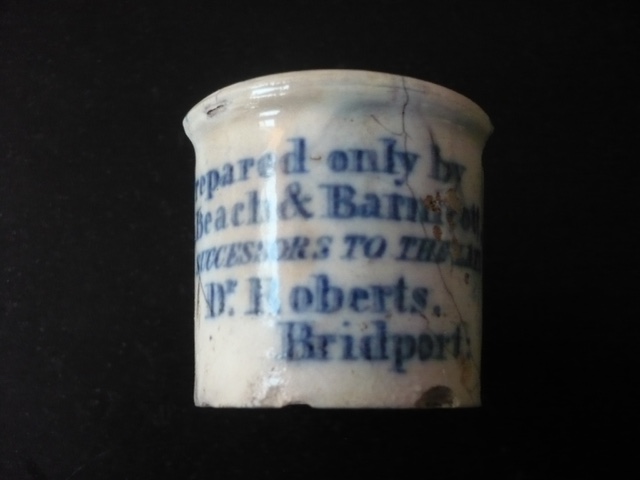